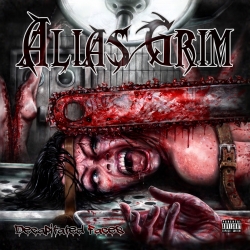 When Horror has no face the results are Grim.
Alias Grim combines two of the most talented, yet demented artists within it's realm, KGP and Bloodshot. With a combination of Horror, Crunk, and a Sick and twisted mentality, Nothing can stand in their way as they collect new faces of horror while keeping it crunk for the family that stands with them. Join Alias Grim and the rest of their Slaughterahs, as they take you through the life of murder, mayhem, and moshpits, and search for new faces to decapitate. Drink Some, Smoke

The KapisEvil store is now Open!.

Or For Digital Purchases, You certainly can visit the following stores

Hard Copies of all cd's available at  CDBABY

Thank you for the support!