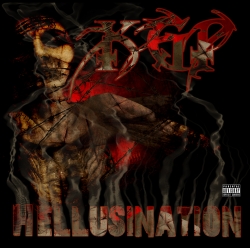 By Popular Demand, HelluSiNation is back in stock for 2015. With Brand New Artwork for the 15 year Anniversary Edition. This album was originally released in 2000 and was recorded in the basement of Kap's house on a Boss 8. (as you can hear in it's not so great quality) Kap has been very open about his dislike for this album, Which is why it remained unavailable for so long. But the fact is Collectors don't care what it is. They must have it. Some people fuckin love it, because of it's classic sound. HelluSiNation is a follow up from the Classick Releases Necrology and Acidikrevelationz. This cd features KGP (Kap), his Cousin Onto, and some cameo verses from the wicked witch Destiny. This is extremely rare, and has been available only on Amazon on demand for the past 7 years. While the quality of the recordings were not Top notch, it was definitely Wicked rap in it's purest form for it's time.